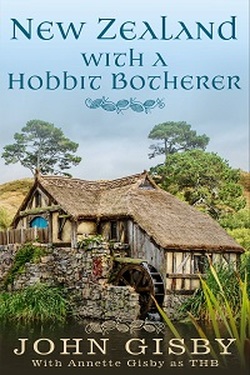 What should you do if your spouse becomes addicted to the Lord of the Rings movies and swoons at the very mention of Orlando Bloom's name? (Thud. Quick, fetch the smelling salts.)

An apparition that recommends touring New Zealand in an effort to prove that its sheep pastures aren't really filled by frolicking Hobbits. Just sheep and the occasional zorbing local.

This is the hilarious tale of such a tour, featuring snow capped mountains and turquoise lakes, flightless birds and flying cattle, bungy jumping grannies and the carrot mafia, strange yellow eyes peering up from a road map and hotel receptionists always desperate to know win you are living.