New Zealand with a Hobbit Botherer 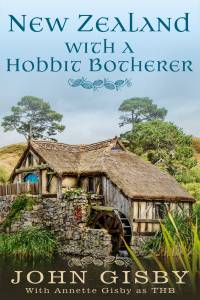 What should you do if your spouse becomes addicted to the Lord of the Rings movies and swoons at the very mention of Orlando Bloom's name? (Thud. Quick, fetch the smelling salts.)

An apparition that recommends touring New Zealand in an effort to prove that its sheep pastures aren't really filled by frolicking Hobbits. Just sheep and the occasional zorbing local.

This is the hilarious tale of such a tour, featuring snow capped mountains and turquoise lakes, flightless birds and flying cattle, bungy jumping grannies and the carrot mafia, strange yellow eyes peering up from a road map and hotel receptionists always desperate to know win you are living.

"I loved the almost-constant references to Lord of the Rings, because those would be the kind of places I would want to see as well, from the spot where they walk on mountains during the movie to where they filmed parts of it, to the hobbit towns. The authors use vivid, detailed descriptions to paint the settings, all the while without losing their original, humorous voice." - I Heart Reading

"What I enjoyed was the tone of the piece. It's written in a conversational tone that I never got sick off, and peppered with jokes. I can't believe that he was only in New Zealand for a visit, he writes as though he stayed there for a long time, and I think he genuinely likes the people and the country." - All Sorts of Books